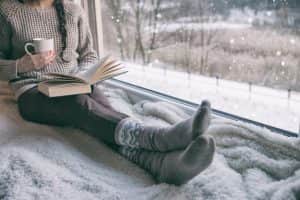 There’s a lot to love about living in an older home: The ornate architectural details, the gorgeous bay windows, the original hardwood floors—they certainly don’t build them like they used to. But while many older homes boast fine craftsmanship, they were not built with the same energy-efficient materials as modern-day homes, nor were they subject to the same rigorous building standards that new construction must comply with. So, while old-world architecture may be pleasing to the eye, it unfortunately falls short in other areas.

ARE YOUR WINDOWS OLDER THAN YOU?

Whether you live in a century-old Colonial home along the Mid-Atlantic coast or a stately Victorian in downtown Pittsburgh, you’ve likely experienced one of the major shortcomings of historical homes—they don’t keep the winter chill out as effectively as newer homes do. Often, the main culprit is the home’s windows. If the windows are original to the house, or if they’re not original but were built before the 1950s, there’s a good chance they are single-pane windows. This means they have only one piece of glass in the sash—as opposed to modern-day replacement windows which feature two, three, or even four panes of glass and have pockets of inert gas in between each pane to provide extra insulation. That said, if you’re living with antiquated, one-ply windows that are old enough to be your grandparents, it’s no wonder they’re not providing the level of comfort that today’s homeowners have come to expect.

TIPS FOR KEEPING OUT THE COLD

So, what can you do to prepare your home for the winter season when your windows are worn out, drafty, or just plain old? For starters, you could upgrade your home with new, energy-efficient windows. However, many homeowners are reluctant to make such a change; they cherish the fact that their house has its original windows and they want to retain the home’s historical accuracy, which is understandable. That’s why the window specialists at West Shore Home have put together a handy list of tips for how to insulate your underperforming windows against the bitter chill of winter so you and your family can enjoy a little more comfort this year.

Older windows often lack sufficient weather-stripping, which allows cold air to seep in through the cracks between the sashes and the frames. With some inexpensive V-seal weather-stripping that you can find at your local home improvement store, you can easily seal-off these drafty seams while still being able to open and close your windows.

Shrink film is a popular choice for fast, cost-effective window winterizing. Using double-sided tape and plastic sheeting, you can shrink the film over the window using a heat gun to provide a firm seal across the interior of your windows. The one major drawback with shrink film is that won’t be able to use your windows while the film is on them, but for some, this is a small price to pay as they wouldn’t be opening their windows that much in the wintertime anyway. Also, when removing the shrink film, it’s important to take extra measures to avoid pulling paint off the walls around your windows.

There are a few other products that allow you to quickly and easily insulate your windows for winter, such as rope caulking and draft snakes. Rope caulking is a putty-like substance that can be easily applied (and removed), and it molds around the window to fill in the gaps and reduce drafts. Draft snakes are made of fabric and weighted foam and are placed on the windowsill to create a seal along the bottom of the sash. Draft snakes are effective, but since they only provide protection in this one area, you may need to use them in conjunction with rope caulk to insulate the whole window.

AND IF THESE WINDOW WINTERIZING TIPS JUST DoN’T CUT IT?

If these quick-fix window winterizing techniques fail to provide you with the comfort you need, or if you would prefer a more permanent solution to your winter-window-woes, turn to the professionals at West Shore Home to have energy-efficient replacement windows installed. We offer a wide selection of beautiful window styles that you can customize to perfectly suit your home’s aesthetic. Contact us today to schedule a consultation and get a free estimate for your project!

New Year Sale
50% Off Installation*
Free Quote & Consultation
Request a Free Quote
*﻿50% off install is equal to 10% off the total project price. **Financing offers a no payment - no interest feature (during the “promotional period”) on your purchase at a maximum APR of 17.99%. Rates vary by state. No finance charges will accrue on your account during the promotional period, as set forth in your Truth in Lending Disclosures, and you will not have to pay a monthly payment until the promotional period has ended. If you repay your purchase in full before the end of the promotional period you will not have to pay any finance charges. Financing is subject to credit requirements. Other restrictions may apply. See design consultant for details. ***Finance plans may not be available in Arizona.