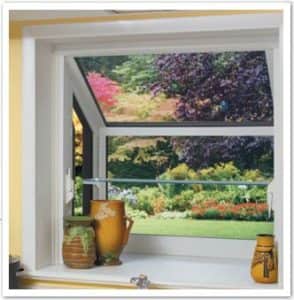 A garden window (also sometimes called a greenhouse window) is a box-like window unit constructed of several small panes of glass connected by vinyl, wood, or metal framing. This configuration creates a glass box-like chamber that projects outward from a home’s outer wall. Most commonly, garden windows are installed above kitchen sinks, however, bathrooms are also another popular location for this style of window. Garden windows typically feature glass shelves which are often used to showcase potted plants, flowers, cookbooks, or other objects of interest. The side window panes on a garden window can typically be opened to allow for airflow while the rest of the panes are fixed. 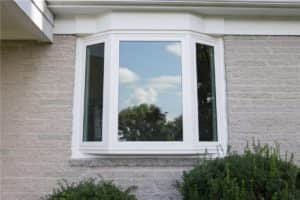 A bay window is a large compound window unit that consists of three separate windows—one in the center that is mounted parallel with the home’s outer wall, and one on either side that is installed at an angle. These side windows are known as flankers. Most often, the central window is fixed while the flankers are operational, but this is not always the case; sometimes none of the windows is operational, and other times all three of them are.

What is perhaps most notable about bay windows, and one feature that they share with garden windows, is that they project outward from the home’s exterior wall. However, the projection of a bay window creates a semi-hexagonal space on the inside that’s known, unsurprisingly, as a “bay.” The extra space this bay provides is convenient because it can help to make a small room feel larger. Also, because the flankers on a bay window unit are angled (usually 30- or 45-degrees) they offer better ventilation than ordinary, flat-mounted windows as they can catch cross breezes from many different angles.

Contact West Shore Home today to learn more about having new garden windows, bay windows, or any other style of replacement window installed. We specialize in super-fast, super-convenient home improvement services so you can enjoy the home upgrades you want without having to wait any longer than you have to. Contact us today to get started.

Flash Sale
12 Months No Payments & No Interest*
Free Install**
Offer Expires 02/05/2023
Get a Free Quote Today
*Financing offers a no payment - no interest feature (during the “promotional period”) on your purchase at an APR of 17.99%. No finance charges will accrue on your account during the promotional period, as set forth in your Truth in Lending Disclosures, and you will not have to pay a monthly payment until the promotional period has ended. If you repay your purchase in full before the end of the promotional period you will not have to pay any finance charges. You may also prepay your account at any time without penalty. Financing is subject to credit requirements and satisfactory completion of finance documents. Any finance terms advertised are estimates only. Normal late charges apply once the promotional period has ended. Call 866-393-4573 for financing costs and terms. Minimum purchase $9,999 required. See design consultant for details. Other restrictions may apply. **Free install is equal to 20% off the total project price. New orders only. Offer not valid on previous sales or estimates and cannot be combined with other offers. Offer expires 02/05/23.