It’s no secret that we’ve all probably spent more time in our homes over the past year than any of us would prefer to ever do again. But that also means you’ve likely had plenty of time to consider and prioritize an array of home improvement projects that you’ve been putting off for some time.

With spring almost here and nicer weather on the horizon, many homeowners are paying closer attention to their windows. Maybe you noticed your heating bills were a little higher during the winter months than you would have liked, or perhaps you just opened your windows for the first time in a few months and the results were less than desirable.

So now you’ve made the commitment to at least explore your options for replacing your old windows with something new. With so many styles and options out there, you may be wondering how to choose the right windows for your home. We’ve decided to help make that research a little less daunting by summarizing the most common window styles available all in one place.

While there are many types of windows to choose from, we’ll begin our guide with the most common style available: 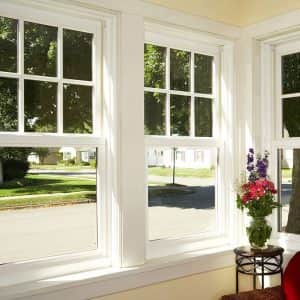 Double hung windows are the most common style of window and are used on a variety of home styles, from mid-century modern to more contemporary styles, as well as bungalows, farmhouses and ramblers. They are made up of two large frames (or sashes) that slide up and down on vertical tracks. One of the biggest benefits of double hung windows is that they allow great air movement and ventilation. Pulling down the top sash while opening the bottom allows for warmer air to flow out and cooler air to flow in on hot days. Another benefit is that the vertical tracks are less likely to accumulate dirt than other window styles. Double hung windows are also easy to open and close thanks to built-in springs, and prices are relatively reasonable due to their wide selection. 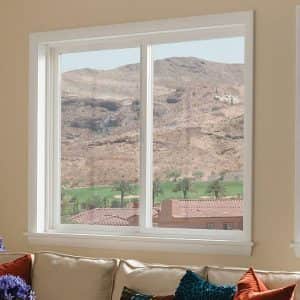 Slider windows are another common style of window found in many mid-century modern and contemporary homes. They are a similar design to double hung windows, but open horizontally along top and bottom tracks as opposed to vertically. Many slider windows will allow both sashes to slide, while some will have one fixed sash and one that slides open. The simplicity of the design makes slider windows an affordable choice, though the sizes and shapes tend to be more limited than double hung windows. 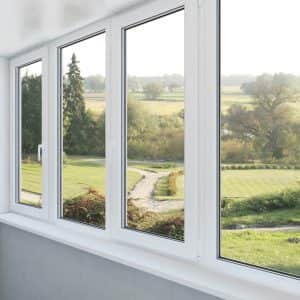 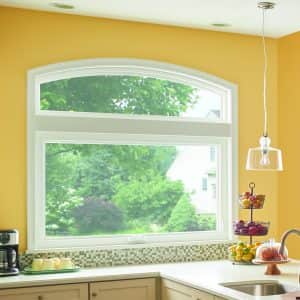 Awning windows work like casement windows, using a crank to open and close. However, awning windows are instead fixed at the top of the frame and swing open from the bottom. One of the biggest benefits of this style of window is they protect well against water entering the home when raining and are therefore a great option if you live in a wet climate. The biggest drawback to awning windows is that they do not pull in outside air as effectively as casement windows. Awning windows are most used in low–level homes and basements as they are very secure against intruders. 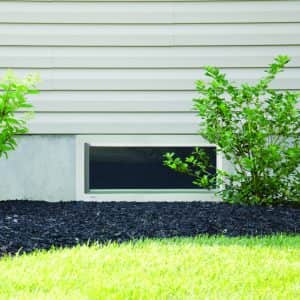 Hopper windows fall into the same family as both casement and awning windows, using a crank to open and close. The major difference with a hopper window is that they are instead hinged at the bottom of the frame and open inward. This is also a good choice for wet climates as they also are effective in keeping out bad weather and offer slightly better airflow than awning windows. Hopper windows are more common on modern style homes but can also look good on traditional styles with the right configuration. 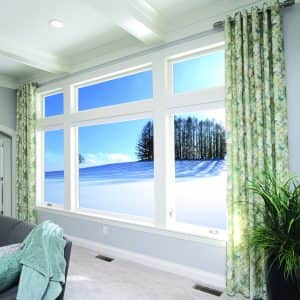 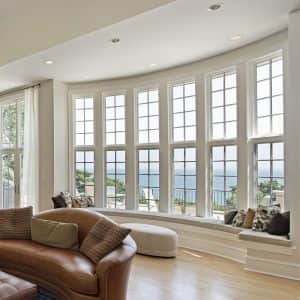 Bay or bow windows are a combination of windows that form a large unit typically consisting of a large picture window in the center with double hung or casement windows on either side. The difference between the two is that bay windows offer a more traditional square look, while bow windows are more rounded and modern-looking. This window style is commonly found on the front of homes and is a visual centerpiece for living rooms and family rooms. They supply a stronger visual aesthetic than other window styles and usually offer seating or shelf space that can be used as a greenhouse for growing and displaying plants. While these styles certainly look great and offer great curb appeal, bay and bow windows are also some of the most expensive options available due to the considerable amount of framing work involved. Because of the large surface area, bay and bow windows are also not as insulating as other styles and are therefore less energy efficient. 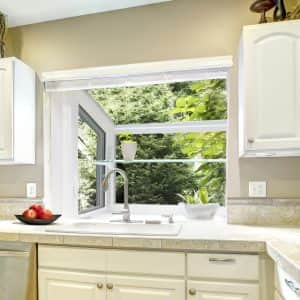 Garden windows work as a smaller scale version of a bay window, protruding slightly outward from the side of the home. Unlike a bay window, however, these windows are typically found in the kitchen above counters or the sink. Garden windows supply more natural lighting that other window styles, and most have side panels that can open and close to allow ventilation. Like bay and bow windows, garden windows can also function as a mini greenhouse for plants and herbs. Due to the smaller size, garden windows are more energy efficient than bow and bay windows but tend to be more expensive than more traditional window styles of the same size.

A Variety of Window Options to Compliment Your Home

Now that you’ve had the opportunity to learn about the different styles of windows available, the next step is to decide which ones are right for you. Once you’ve decided, you’ll be ready to contact your local window company or contractor to schedule an estimate.

At West Shore Home, our design consultants will work closely with you to design a great new look for your home while supplying a seamless installation process. Schedule your own window appointment today.